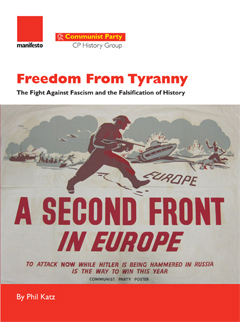 This special new booklet published in association with the Communist Party History Group to commemorate the 65th anniversary of the defeat of fascism in Europe is a celebration of that victory and also a warning of the continuing dangers posed by fascism and the attempts to re-write history.

It includes a number of previously unpublished and well known images (courtesy of the Marx Memorial Library photographic archive) displaying Nazi atrocities and the popular resistance to them in Britain and across Europe.

"When VE (Victory in Europe) day was celebrated on May 8 1945, the people of Europe swarmed into the streets to celebrate their first taste of freedom since 1939.Tyranny had been put to the sword but at a massive cost in destruction of communities and economic life. For many, especially in central and eastern Europe,born after the FirstWorldWar into economic depression and fascism, it was a novel first-ever taste of freedom.

"Today and tomorrow,we must continue to defend and advance the gains of 1945 and ensure that there is no going back."

Phil Katz is a designer, a Fellow of the Chartered Society of Designers and a Fellow of the Royal Society of the Arts. He has an MSc in Economic History from Birkbeck and is a member of the Communist Party. His previous publications include 'The Long Weekend – combating unemployment between the wars'; 'Thinking Hands – the power of labour in William Morris' and 'The People, Organised – trade unions on the home front 1939-1945'.